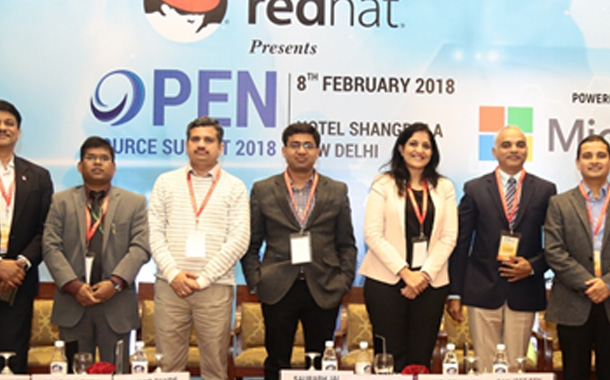 The Open Source Initiative is celebrating its 20th Anniversary in 2018 as the term was coined in a session held on February 3rd, 1998 in Palo Alto, California. In the last 20 years, the initiative has come a long way. Acknowledging the importance of ‘open source initiative’ which continues to play in our lives and to enable open discussion on the challenges that exist and to work out strategies to iron them out, Bharat Exhibition organized an ‘Open Source Summit 2018’ in New Delhi on February 08, 2018.

In India, we see Government increasingly use ‘open source’ and it has already started to disseminate more information and offer more services online these days. The Government initiative of Digital India demands that open source be used more widely not just to save costs and time but also to ensure implementation of some of the ambitious plans effectively.

There is a need to connect new websites and applications to older ones, as well as across departments. To avoid having to rewrite old software code to function with new apps, Governments are encouraging developers to use software with built-in open standards. The primary goal of employing open source in government is also to facilitate the transfer of data as smoothly as possible. Open-standards proponents say that this approach would lead to more innovation within government and better citizen services. The forum analyzed the success stories that have been achieved and what are the real challenges that might be slowing down the growth.

While delivering the keynote address, Harish Pillay, Global Head, Community Architecture and Leadership, Red Hat Inc. “Digital India is a great initiative by the government of India and is gaining momentum. Open Source is an extremely important aspect of Digital India!”

Addressing the challenge about security, Pillay shared that, “Open source is more secure because we have more people looking at the code. If there’s vulnerability, there is a bigger chance for it to be quickly detected and addressed. When everyone collaborates, the best technology wins.”

Neetika Chabbra, Chief Architect & Founding Partner, Gaia Smart Cities said, “The world is going towards a shared economy where assets are being shared. Now even assets such as IPs are coming out as collaborative efforts, where people are coming together to create a solution, a product, to create a service for general public”.

Talking about strategy for open source, V. N. Shukla, Senior Director (IT), Election Commission of India said, “If you look at the definition of open source that was given 30 years ago it is about the core program only. It never spoke of any product, service or anything else. Essentially the stakeholder was expected to be a technical person and not an end user. So, there is a need to redefine the terminology and get the end user in the picture.”

Talking about the policy framework in the country regarding ‘open source’, Debarata Nayak, Project Director (Open Source Collaboration) & Additional Director, Digital Locker, National e-Governance Division (NeGD), MeitY, Govt. of India, said, “We should look at ways to reuse the product. If we reuse, the modification will automatically happen and it will automatically be a much richer product”. He spoke about the need of collaboration within the government to make the code being available freely for modification and only then mass replication can happen that will in turn benefit the society.

Giving a perspective on the implementation side, Golok Kumar Simli, Chief Technology Officer, Passport Seva Project, Ministry of External Affairs, Government of India, said, “The idea is when you are bringing open source at the developer platform, your internal team has to be very guided to know which area of the product is in the part of the development set-up or coding set-up”. He mentioned that he has observed that most times while using open source, developers are tempted to use and reuse the same code without checking for security concerns and updates. Licensing is the other concern area pointed by Simli.

Continuing on the talk of implementation, L R Prakash, Director, C-DAC, Chennai, said, “The policy in isolation does not translate into implementation. There has to be an ecosystem around the same. There are procurement issues and awareness is a challenge. Also, one needs to tangibly answer to every user, what is in it for them and everyone approaching the government section must be able to answer this.” He concluded by saying that there is a need to spread awareness about open source right at the grassroots level.

Anand Pande, Senior Vice President & CISO, Goods and Services Tax network (GSTN) pointed out another challenge that they have been facing while using open source is integration. He said, “it is a challenge to integrate or make all the tools and technologies work together and give the desired results”.

Sourabh Jain, Head Paytm – Build for India, Paytm said, “There is no community around open source in India. While 90% of the people use open source but they don’t contribute to it.”

Sanjeet Sen, Product Marketing Lead – Open Source on Azure, Microsoft said, “Everyone needs to focus on the business challenges rather than the underlying tech. Technology should be just an enabler in the process. Public cloud is basically enabling all the organizations to have that pace and agility to help businesses solve their complex business problems”.

This event was endorsed and supported by Cellular Operators Association of India (COAI), Red Hat and Microsoft. The ‘Open Source Summit 2018’ brought together leaders across government, business and academia under one roof, who debated on the topics affecting the adoption of ‘Open Source’ and discuss some of the case studies that have set a benchmark for many to follow.