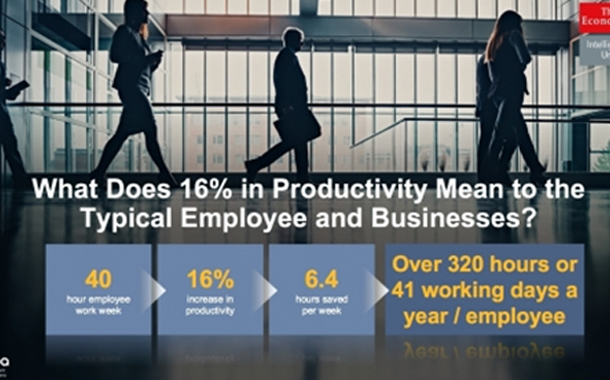 A new global study, “Mobility, Performance and Engagement” by The Economist Intelligence Unit (EIU) has established a measurable link between more mobile-first working environments and an increase in employee engagement. The study proves that CIOs can drive increased business performance through well-developed mobile strategies and mobile-optimized work environments.

Sponsored by Aruba, the study showed that companies rated by employees as “pioneers” in how they support mobile technology saw a rise in productivity (16%), creativity (18%), satisfaction (23%), and loyalty (21%), when compared to organizations that were poorly rated at supporting mobile technology, the release said.

The report, which surveyed 1,865 employees globally, demonstrates that many workers recognize the benefits of mobile-optimized work environments. According to the report, six in ten (60%) employees said mobile technology makes them more productive, while more than four in ten (45%) believe it causes their creativity to rise. The EIU’s analysis looked to define how the wide adoption of mobile technology was impacting business outcomes by defining the key dimensions of a mobile-first employee experience, then demonstrating how each dimension contributes toward business performance.

The ability to collaborate was also seen to have a major impact on productivity. Globally, the ability to collaborate effectively was rated the most important factor affecting creativity (38%). Another one-third of respondents said it had the greatest impact on their loyalty. Also, to help foster better collaboration, 42% of companies are now using digital collaboration tools that work on mobile. This figure rises up to 56% in the UK. Mobile messaging apps, such as Whatsapp, are also used for work by 31% of organizations, peaking at 66% in Singapore.

Additionally, the report said that according to 42% of employees, the ability to access information quickly and easily has the greatest impact on their productivity levels. Currently, 54% of companies are providing access to the company network from any mobile device to support working anywhere in the office or remotely.
Another important aspect as called by the report was workplace freedom. For 32% of employees, being able to work anywhere within the office is the biggest contributing factor to their creativity. A further 29% declared that workplace flexibility makes the biggest difference to their loyalty. To foster this freedom, the report finds that 46% of companies are now offering a hot-desking environment with mobile connectivity at any location, showcasing that more collaborative work environments are on the rise. The UK offers the highest level of hot-desking (54%) followed by Australia and Germany (both 53%).

Chris Kozup, Vice President of Marketing at Aruba, gave his comments, “Today, most companies and employees understand that a mobile-first approach can be good for business, but if you can tell a CEO of a Fortune 500 company that their organization can achieve a 16% increase in employee output, or tell HR directors that they can increase loyalty by over one-in-five, we believe they would make mobility an even greater investment priority. While past studies have recognized the impact of increased mobility on employee engagement, establishing the business outcome has been a missing link. This report quantifies it.”