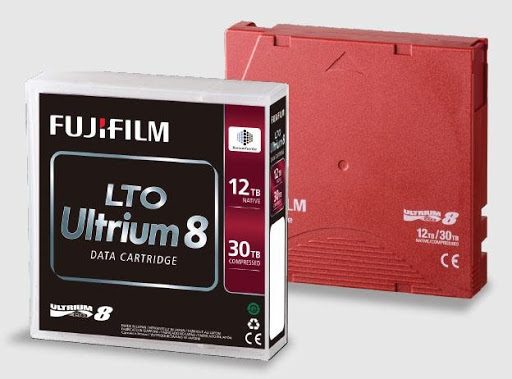 (LTO8) with a storage capacity up to 30TB (12TB for non-compressed data), twice that of LTO7 and high speed data transfer reaching750MB/sec.

Adhering to the 8th-generation LTO Ultrium* standards for magnetic tape storage media, Fujifilm had launched LTO Ultrium8 Data Cartridge (LTO8) in the Q3 2019. The LTO8 allows for backup and archive of large-capacity data, using the barium ferrite (BaFe) magnetic particles with its outstanding recording/retrieval performance and long-term durability. It offers a storage capacity of 30TB (12TB for non-compressed data), twice the capacity of the previous generation. It is also capable of transferring data at 750MB/sec. (360MB/sec. for non-compressed). With its ability to provide secure and long term storage of massive data at a low cost, LTO8 responds to the increasing demand for data storage.

With LTO8, Fujifilm has further developed its unique “NANOCUBIC technology” to produce even smaller BaFe magnetic particles than those used in the LTO7. The magnetic particles are separated by highly controlled dispersion process and the tape surface roughness is controlled, achieving smooth surface of magnetic layer with enhanced NANO coating technology. In this way, Fujifilm has increased the storage capacity up to 30TB (12TB for non-compressed data), twice the capacity of LTO7, high speed data transfer reaching750MB/sec. (360MB/sec. for non-compressed data). Furthermore, appropriate material design has allowed for high tracking performance and durability for the magnetic heads in the tape drives, boost reliability showing stable and excellent performance.