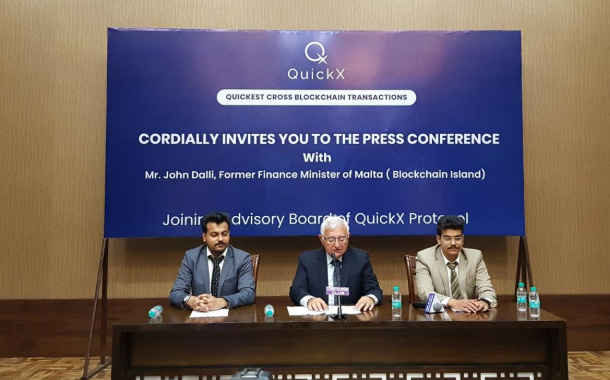 After a ground-breaking performance in Dubai Blockchain Summit 2018, India born blockchain startup, QuickX, joined hands with the Former Finance Minister of Malta (The Blockchain Island) to promote the technology internationally.

The Blockchain startup welcomed Sir John Dalli, Former Finance Minister of Malta on the advisory board of the company in a press conference organized at Constitution Club of India, New Delhi, today. Talking about the technology, Kshitij Adhlakha, Founder and COO of QuickX Protocol, said, “We started working on blockchain in 2016 and saw that the promising world of blockchain has a few fatal flaws. We figured out that limitations such as Transaction speed, Cost, Scalability and Cross blockchain transfers are hindering its mass adoption. So we came up with the idea of QuickX”.

Further he said, “It is a novel protocol designed specifically to cure the many fatal flaws that plague blockchain, today. It performs transactions off the chain for same Blockchain assets and utilizes pooling facilitators who supply liquidity for cross chain transfers. Through this, it accelerates the transaction speed greatly, dissolves the interoperability problem between different blockchains, relieves the transaction fees and also solves the issue of scalability. All this happens instantly and with next to zero fees”.

“With QuickX, it is now possible to use digital tokens in real life, swiftly, at anytime, from anywhere”, he added. QuickX is said to solve the major speed breaker hindering the mass adoption of blockchain assets. It claims to allow thousands of transactions a second by building a decentralized platform which improves the cost, scalability and speed of the blockchain as well as performing inter blockchain transactions with an almost negligible fee.

While Addressing the Press Conference, Vaibhav Adhlakha, Founder and CEO, QuickX Protocol, said, “We are extremely delighted to have the Former Finance Minister of Malta, Sir John Dalli with us today. At QuickX we strive to add utility to the existing blockchain technology and believe that the beautiful country of Malta shares this vision with us”.

According to the Information, Malta is known as an island of blockchain. The country is trying to address the ability to re-conceive how businesses can be operated through smart contracts, the use, and development of advanced platforms and protocols, the new dimension of economic enterprises which support cryptographic technologies. It is determined to achieve its goal by trying its hand to put public transport service, financial services etc. on blockchain.

The country is joining hands with the best technologies available all across the globe- to bring back the countries best cream to realize the goal. Malta is developing a regulatory environment that has been created so as to attract these tech firms, building the proven environment which was set up by Sir John Dalli in 1994 (He introduced VAT in Malta).

Speaking on the occasion, Former Finance Minister of Malta, Sir John Dalli, said, “I wanted to come to India for a long time and savor the vast culture that makes up this great country. I am glad to be here today and to experience some very prominent culture achievements of the past and the innovative technologies of the future that will change the world”.

“If we come together with more such technologies like the India- born QuickX protocol we will be one step ahead in making this world a better place. QuickX, is the next big thing. I am glad to join their Advisory Board and to be a part of this breakthrough technology in the blockchain space. I will take this opportunity to promote and support this technology in Malta and at international level”, he added.

The Company is looking forward to see the shape-shift and value addition the technology is yet to provide. It is said that QuickX Protocol will empower each and everyone to buy a brick to a castle, with its innovative technology, and revolutionize the world of transactions by using blockchain assets.

Changing IT skills landscape and Internal IT