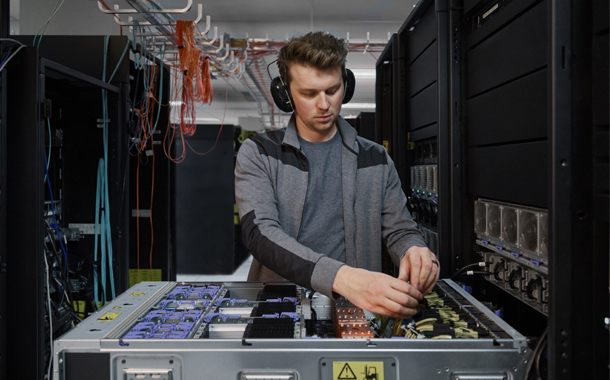 IBM launches new IBM Power E1080 server, the first in a new family of servers based on the new IBM Power10 processor, designed specifically for hybrid cloud environments. The IBM Power10-equipped E1080 server is engineered to be one of the most secured server platforms and is designed to help clients operate a secured, frictionless[iii] hybrid cloud experience across their entire IT infrastructure.

The IBM Power E1080 server is launching at a critical time for IT. As organizations around the world continue to adapt to unpredictable changes in consumer behaviors and needs, they need a platform that can deliver their applications and insights securely where and when they need them. The IBM Institute of Business Value’s 2021 CEO Study found that, of the 3,000 CEOs surveyed, 56% emphasized the need to enhance operational agility and flexibility when asked what they’ll most aggressively pursue over the next two to three years[iv].

Many see the answer to this need in a hybrid cloud computing model, which combines on-premises resources with cloud-based infrastructure and can offer up to 2.5x greater value than a public cloud-only approach[v]. However not all hybrid cloud models are designed equally.

“When we were designing the E1080, we had to be cognizant of how the pandemic was changing not only consumer behavior, but also our customer’s behavior and needs from their IT infrastructure,” said Dylan Boday, VP of Product Management for AI and Hybrid Cloud. “The E1080 is IBM’s first system designed from the silicon up for hybrid cloud environments, a system tailor-built to serve as the foundation for our vision of a dynamic and secure, frictionless hybrid cloud experience.”

The new IBM E1080 was designed to introduce several key features including:

The IBM Power E1080 server helps deliver on the customer demand for a frictionless hybrid cloud experience, with architectural consistency across the entire hybrid cloud estate to simplify management and seamlessly scale applications to meet the dynamic needs of today’s world.

“We have been long time IBM Power users and are looking forward to being one of the first organizations to test the new IBM Power10-based E1080 system with our mission-critical applications” said Klaus at Finanz Informatik. “The new server addresses our demands to continue delivering our services at scale with high resiliency requirements, including new levels of security and improved energy-efficiency. We are also keen to see how the new features can accelerate our journey to hybrid cloud and the infusion of AI into our business applications.”

When leveraging an IBM Power10-based server, like the E1080, with the cloud-based IBM Power Virtual Server in a hybrid cloud format, the architectural consistency across resources means the often-bespoke mission-critical applications that tend to reside on-premises can be moved into the cloud as workloads and needs demand. This is designed to help clients avoid the prohibitive costs and time required associated with refactoring for a different architecture.

The IBM Power E1080 also has the capability to scale instantly with Power Private Cloud for Dynamic Capacity, allowing users to scale up and down with unused CPU capacity as needed and only pay extra for the additional resources they used. This can help improve operational efficiency and flexibility while avoiding server sprawl and lengthy procurement processes by bringing a cloud-like payment model to the datacenter.

Further enhancing the cloud-like economics for local hardware, the IBM Power E1080 is the first on-premises system planned to support metering by the minute for both Red Hat Enterprise Linux and Red Hat OpenShift, extending capabilities already available on IBM Power Virtual Server. Together, this is designed for even greater customer control of when, how, and where their applications are deployed.

“Red Hat has long been committed to delivering choice to our customers, a critical component in how these organizations approach open hybrid cloud deployments. Our collaboration with IBM on Power10 will serve as a continuation of this commitment to support a broad range of architectures,” said Stefanie Chiras, senior vice president, Platforms Business Group, Red Hat. “As an architectural foundation for Red Hat Enterprise Linux and Red Hat OpenShift deployments on-premises metering, IBM Power will offer the scale and flexibility to help customers realize the benefits of open hybrid cloud.”

Through the close synergy with Red Hat, the IBM Power E1080 offers 4.1x greater OpenShift containerized throughput per core vs compared x86-based serversvi, allowing for more workloads to be deployed simultaneously within a single system.

The Power of Ten for Efficiency, Security, and Enterprise AI

With IBM Power10 at the heart of the system, the IBM Power E1080 server can deliver up to 30% more performance per core and over 50% better total capacity at the socket and system level as compared to the previous generation IBM Power E980 servervii. This translates to 33% lower energy consumption for the same workload on the IBM Power E1080 as compared to the IBM Power E980[x], giving customers the platform to consolidate workloads and save on hardware and software costs. For example, an IBM Power customer projected that they could consolidate an industry-standard transactional database running across 126 x86-based servers down to two IBM Power E1080 servers. This projection would translate to an 80% reduction in server energy use and a 70% reduction in per-core software licenses for the customer.

IBM Power10 also provides new enhancements for securing consolidated workloads. The Power10 processor has the capability to scale with transparent[xi] memory encryption, which is designed to simplify and support end-to-end security without impacting performance.  Compared to IBM Power9, accelerated encryption performance is enabled by IBM Power10 having 4x the number of encryption engines per core, and translates into a 2.5x faster per core performance for AES encryption compared to the previous generation of IBM Power serversix.

IBM offers security control solutions at every level of the system stack, from the foundational hardware like the processor and memory, to key software like the operating system, hypervisor, and applications. The E1080 uses IBM PowerVM as its built-in hypervisor, which has significantly fewer Common Vulnerabilities and Exposures (CVE) than competitive hypervisors as catalogued by the US Government National Institute of Standards and Technology’s National Vulnerabilities Database (NVD)[xii] .

The new IBM Power10 family is supported by a wide range of ISVs, IBM Business Partners, and other external stakeholders that recognize the value of the new platform’s capabilities for their customers.

In addition to SAP, several other ISVs that provide a wide range of services including databases, secure medical records processing, security, AI, and more have announced support for IBM Power10. To read more of their perspectives on this new announcement, please go to: http://www.ibm.com/blogs/systems/innovating-with-isv-partners/

To help these services get into the hands of customers, IBM is working closely with our channel partners so that they can work closely with customers and build solutions that work for them.

“As one of the leading IBM Power Business Partners in Europe, we recognize the differentiated value that IBM Power can deliver to our customers,” said Udo Sachs, Head of Competence Center for Power Systems at SVA. “In addition to increased performance, the IBM Power10-based E1080 server is designed to help our clients take their core business applications to new levels of security and allow for much more energy efficiency. Both are very critical issues for our customers in today’s world.”

IBM is taking orders for the IBM Power E1080 now, with shipments expected to begin before the end of the month. IBM is also introducing Power Expert Care, which offers a tiered approach to service including Advanced and Premium Expert Care tiers.  The simple service tiers and pricing facilitate straight-forward support options for the IBM Power E1080 server, and additional add-ons such as hardware and software system health checks and regular security updates are designed to ensure that the systems stay protected against the latest cybersecurity threats, while also providing software and hardware coherence and higher systems availability.

“IBM played a critical role as a technology partner during the merger of erstwhile Allahabad Bank with Indian Bank. With the amalgamation, IBM’s enterprise-class Power servers and storage helped us address critical business requirements like multi-fold increase in transaction volumes, back-end processing load, resiliency, high availability & scalability across the deployed solution. This has become the strong foundation for ensuring an overall enhanced experience for our customers. IBM has pro-actively taken steps to fine-tune the OS parameters for achieving optimum performance for the Core Banking Operations on the IBM Power Systems. All of this was well planned and executed even during the peak pandemic time.” said Deepak Sarda, CTO, Indian Bank.

Ravi Jain, Director – Server Sales, IBM India/South Asia added, “The more than expected duration of the pandemic has created heightened urgency in execution for businesses across industries. Organizations need to move with speed, agility, and the flexibility to react to changes in their customers’ needs in real-time while driving innovation and staying ahead of the competition. To achieve such agility, there will be an increasing mix of workloads on-premise and off-premise. While the latter is predominantly cloud-native, the former is getting transformed at a fast pace.”

“The newly launched IBM Power E1080 server is designed to be the backbone of a hybrid cloud platform that can provide maximum inter-operability and control to the clients. It will help for seamless deployment of workloads across the hybrid platform as well as faster development of new cloud-native applications, helping enterprises in India to scale their operation and deliver enhanced services to their customers. We see opportunity from BFSI, Telecom, Manufacturing, Retail and Healthcare sectors for the IBM Power10 servers in India and our ecosystem partners will be an integral part of our go-to-market strategy. As part of our go-to-market strategy for Power10 server, we will also be reaching out to Independent Software Vendors who work with clients in a garage format to implement their solution through IBM servers,” said, Ravi Jain, Director – Server Sales, IBM India/South Asia.

Your Options For Diversifying Your Business