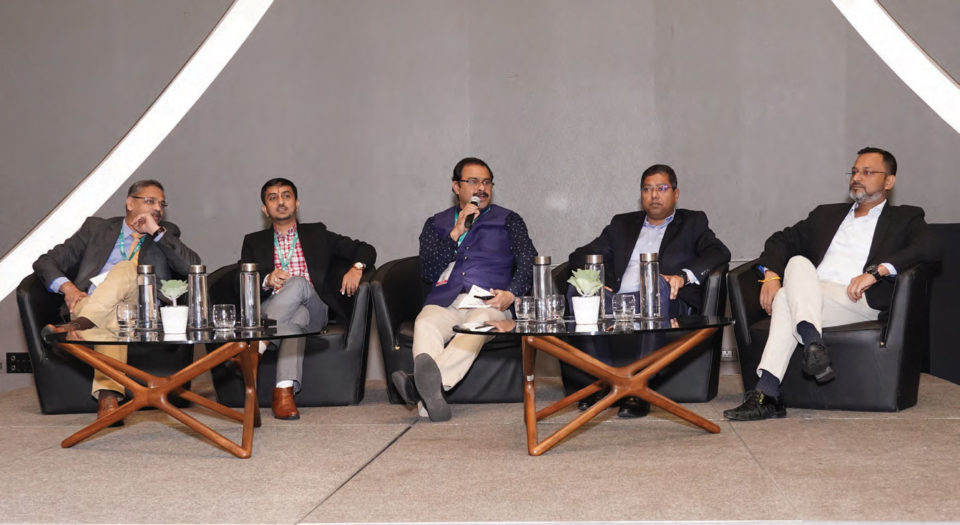 This panel elaborated on the evolution of the Healthcare sector as the service providers increasingly incorporate technological advancements in favour of providing an integrated, transparent experience to the patients.

The panel on the Digital Transformation in the Healthcare Sector was an exploration into how technology is shifting the focus of the healthcare solution providers to customer-centricity where the priority is to offer the patients a transparent access to the processes. Moderated by Syed Kadam Murshed, VP IT, Future Oncology Hospital, the session was joined by Girish Koppar, GM IT, Wockhardt Hospitals; Kishor Gojiya, Head IT, CIMS Hospital; Vishal Anand Gupta, CIO, Suraksha Diagnostics and Vijay Anand, VP IT & Compliance, Visionary RCM.

Syed Kadam Murshed, VP IT, Future Oncology Hospital, began the discussion by highlighting nthe fact that customers are coming up as an evolving factor in the healthcare industry. In addition to the customers or patients, another important factor in this industry are the doctors and the hospitals that are providing the healthcare facilities.

Taking off from this point, Girish Koppar, GM IT, Wockhardt Hospitals, recounted that, “In the last decade a lot of things have changed in the healthcare industry. One example would be the digital access to test reports for the patients. They no longer have to physically go to the hospital or pathology lab to collect their reports. They can get it, for instance, through email. Then there is the emergence of mobile apps for doctors and patients and the integration with bio-medical devices. This transformation is becoming a life saving experience.” because data is being captured and delivered. Initially claims were processed manually and physically,

This integration of technology into the healthcare industry has accrued multiple benefits. Speaking on this, Kishor Gojiya, Head IT, CIMS Hospital, said, “Over the last couple of years, the focus on keeping and storing health records of patients is becoming important. Today everybody wants their health records on their phones or IoT devices. Based on the scenario that people today are aware of the technology advancements, healthcare should have a robust system wherein they can develop and design according to the customer needs. So, for the healthcare service providers, it is mandatory to build the ERP on their platform so that their customer gets satisfaction according to their requirements.”

Connecting the healthcare industry with the insurance claims, Vishal Anand Gupta, CIO, Suraksha Diagonstics, contributed to the discussion from his experience. He said, “We tried to bridge the gap from the technology and data front which a customer faces. Most of us have gone through the medi-claim based process of admitting a patient in the hospital and waiting for hours to understand the status of the claim, whether it has passed or not.”

Addressing the intimation process in medi-claim based processes, Vishal said, “There is a huge concern in the insurance industry for pre-intimation. Usually we are used to a post-intimation process. Once you are done with everything, the hospital will send your data to the insurer, the insurer would then go through it, if there is any issue with respect to that, they will come back to you. This entire process of the patient getting discharged for an insurance patient typically took six to eight hours. With the connectivity technology brought, and the internal operability of data, this process of waiting gets eliminated. So, the moment the patient gets intimated to the system, the process starts. The challenge is that it is still not real-time. The challenge could be with respect to the policy level as some hospitals might not want their real-time data to go to the insurance companies. It is always a very controlled mechanism of sharing the data.”

“The problem is that everybody is looking at it from their own perspective but nobody is looking at it in terms of customer centricity in their workflow. If we look at the Ubers and Olas of the world, their success comes from customer centricity in their workflow. People have to change their approach from operation centricity to customer centricity. The insurance companies are trying to make their processes as transparent as possible. Every intimation that comes in, which all departments it is going through, what is the time frame they are taking, it is all available either on their website or on their mobile apps or partner systems. As much of transparency into their workflow comes in, the customers are well advanced notified that this is what is happening and this is what is supposed to happen in the next step of your claim process,” Vishal explained.

Vijay Anand, VP IT & Compliance, Visionary RCM ended the discussion with a comparison of the Indian and US Healthcare Scenarios.

Digital Transformation in the Manufacturing Sector